This article originally appeared at http://bigpicture.net/content/shooting-perfection 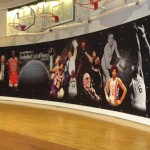 Go Graphix shoots (and scores) with a project for The Basketball Hall of Fame.

The Job: The Naismith Memorial Basketball Hall of Fame in Springfield, Massachusetts, is home to more than 300 basketball luminaries. For the Hall’s 2012 enshrinement ceremony, design team 42 Design Fab wanted to create something that really stood out within the focal point of the museum: the facility’s basketball court. The resultant proposed backdrop mural of basketball legends didn’t need to stand the test of time (it would only be installed for two years), but as an active part of center court it did need to stand the test of bouncing basketballs.

Production: 42 Design Fab needed someone who could do everything from output to installation all in one week. So, they contacted Go Graphix in East Longmeadow, Massachusetts – which has worked with 42 and the Hall of Fame on previous projects – to execute the 8 x 55-foot wall mural.

Images were supplied through the Hall of Fame and provided to Go Graphix on a thumb drive with 2 gig worth of files.

Meanwhile, Go Graphix worked with 42 and the Hall’s curator to find the best vinyl and overlaminate for the backdrop mural – which would take a lot of abuse. The court is an active part of the museum where kids are shooting at baskets – and not always making their shots. “They’re missing and hitting the mural, and kids are probably running into it, so we had to come up with something that would be durable,” says Jim White, Go Graphix president. To make sure the mural was ball- and childproof, White and his team took some “wild shots,” actually tossing basketballs at graphic samples to find the best choice.

When all the testing was completed and no scratches or dents were revealed, Go Graphix proceeded to print the images (16 sections that ranged in size from 34- to 38-inches) with its HP Designjet L25500 printer onto 3M Controltac 180cv3 vinyl using HP latex inks. An R-Tape 5-mil polycarb overlam was added for protection. Output took six hours.

The most difficult part of the installation on the curved, metal-paneled wall: the 256 screws (16 screws per panel). Each screw had to be removed before the graphics were applied, and then screwed back onto the mural and individually wrapped.